Novonix’s Differential Thermal Analysis (DTA) system enables the reliable measurement of the evolution of liquid electrolyte in lithium-ion cells and other electrochemical cells. 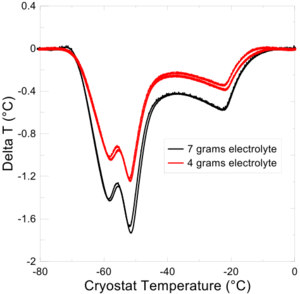 The Novonix DTA system provides information about the evolution of liquid electrolyte including:

Lithium-ion cells degrade due to reactions between the liquid electrolyte and the electrodes. These reactions can cause sudden failure of the cell after seemingly stable performance. The lithium-ion differential thermal analysis (DTA) system is able to quantify these reactions in a non-destructive manner to understand battery failure. It is crucial to monitor how the liquid electrolyte has evolved during the lifetime of a battery.

These measurements can be performed throughout the lifetime of a lithium-ion cell, such that the thermal signature, and thus the electrolyte evolution, can be understood and conclusions about the state of health of the battery can be made.

The Novonix DTA system is controlled automatically with software and can be configured for testing pouch cells and cylindrical cells.

Novonix offers DTA and cell testing services in their facility, providing access to all Novonix high precision chargers, thermal chambers, and lab equipment. Contact us here for more details on how we can accelerate your understanding of cell failure.